On Teenage Dogs and Thunderstorms

I have been very quiet on here, mainly because I have actually been busy, both with work and packing.  In just over two weeks, I'll be moving back to VA.  My brain hasn't really figured out how I feel about that yet.  I'll let you know.  In the meantime, would you like a quick Vista story?

So it's nearly been a year since Vista scuttled awkwardly into my life and settled herself in as its neurotic little heart.  As much as having her has changed the day-to-day of me, I've had a chance to watch her change, as well.  The most recent change is that she has basically become a snotty little teenager.  As 1 year, 9 months (or so) puts her squarely in the pre-teen age range, I suppose it makes sense.  And if you don't believe that a dog can display teenage person-like tendencies, then you have not heard one of her patented exaggerated sighs.  I swear she even rolls her eyes.

Last night, we had hours of thunderstorms.  Vista's bed is just beneath the window, so she was getting the worst of the light and noise.  At one point, there was a crash of thunder so loud that it woke me up (which is nearly impossible to do without, say, a baseball bat) and I immediately leaned over to check on Vista.  Well, I may sometimes forget that she spent the first chunk of her life living outside, but she certainly hasn't.  Apparently thunder is nothing to her.  In the dark, I couldn't really tell how she was, so I said "Baby, are you okay?" thinking that if she wasn't, she'd likely take the cue and jump into bed with me.  At that moment, lightening lit up the room, and Vista sat up to give me a look that I can only describe as "Woman, I am sleeping here.  What is your problem?"

My mom is fond of saying of Vista, "This is going to be a great dog in about five years."  I can only hope that she's right.
Posted by Kelly Anne at 1:23 PM No comments:

Email ThisBlogThis!Share to TwitterShare to FacebookShare to Pinterest
Labels: vista

I just spent a week in the Galapagos Islands.  My aunt was in charge of photos after my camera died, so I don't have any to share just yet, but until I do here are some lists.

Things I Already Miss About the Galapagos
(this list is, as always, in no particular order)

1. the vast, vast Pacific Ocean
2. looking out the window to see Galapagos Sharks swimming around the ship
3. catching sight of a ray leaping in the distance
4. the Frigatebirds circling above
5. the way the ship rocked gently at night
6. plantain chips (yum)
7. swimming with Sea Lions and Green Sea Turtles
8. the scent and taste of the sea air
9. the way everyday brought a new excitement or discovery, even for the people who lived there

The Animals I Saw There (Off The Top Of My Head)

I've run out of animals, but not out of love.  I have so much love for that place, though.  I would go back in a second (the honeymooning couple on our boat put ideas in my head), but next time I think I'd do this trip and check out Peru, as well.  And I would do during the Albatross mating season so I could see their ridiculous mating dance.

Ha ha ha, listen to me talking like I have money and can afford to travel!

(Thank you, Anne, you are the very best aunt a poor, travel-addicted could EVER HAVE.)
Posted by Kelly Anne at 2:22 PM 1 comment:

Shots From Around Town 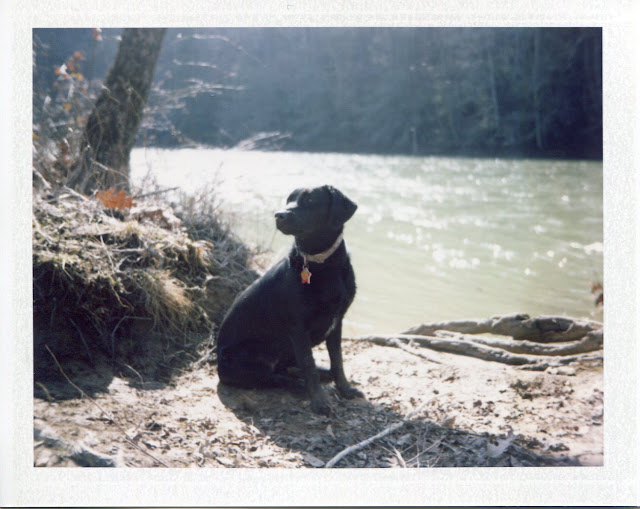 When I first moved to Marlinton, I took my huge secondhand Canon DSLR out and walked around the town snapping photos.  Today, since it's beautiful, I have a new secondhand camera I'm trying out, and my dog is a canine perpetual motion machine, I decided to recreate that walk.  Here are the shots I got, as well as two from another walk yesterday.  They're far from professional-looking since my trial-and-error method of figuring out cameras is often more error than trial, but I'm getting there.

The camera is a Polaroid Colorpack II, which was produced from 1969-1972, so mine dates from sometime in there.  It originally came with a detachable flash, which mine lacks.  I'm using Fujifilm FP-100c film. 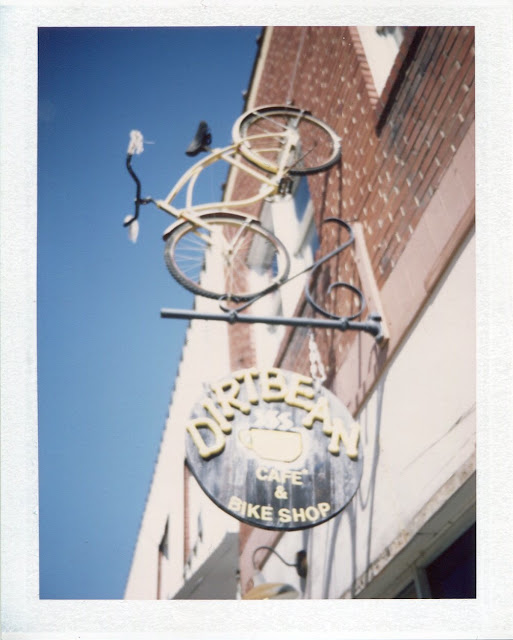 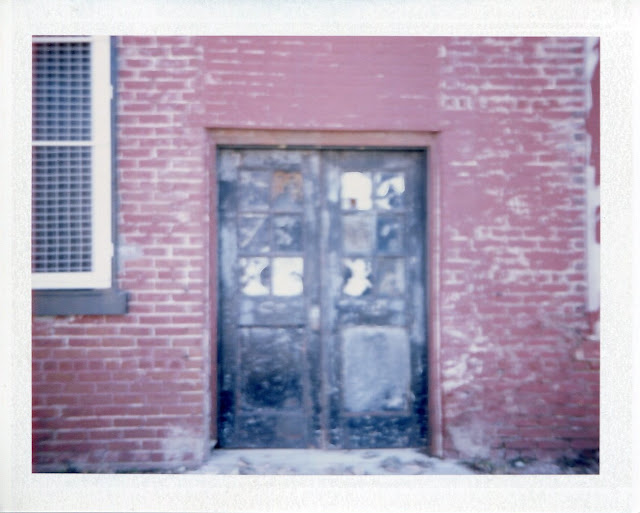 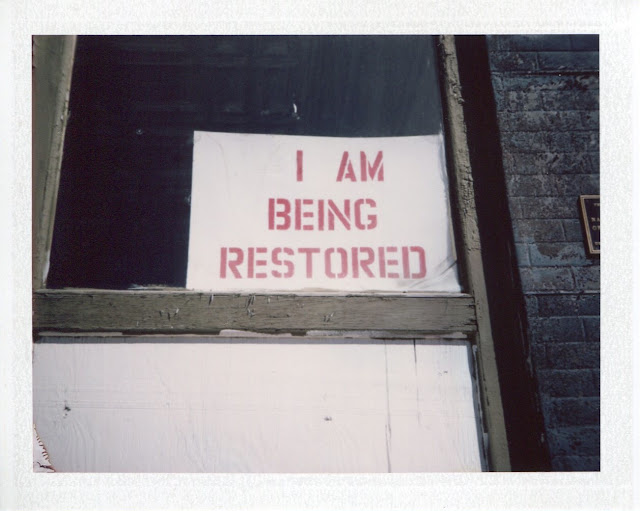 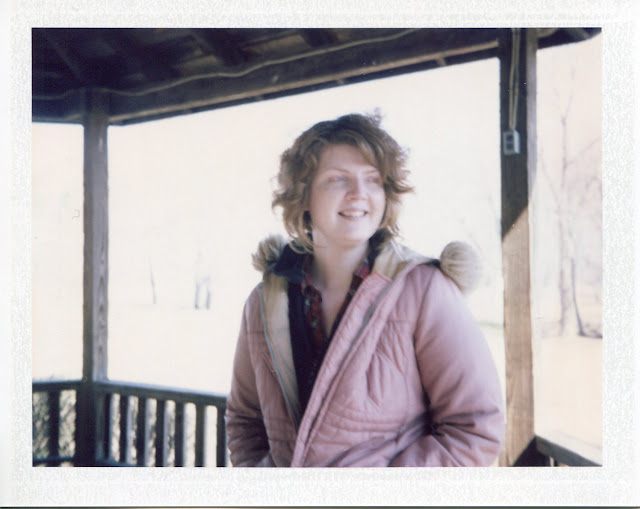 This is Michelle, the Pocahontas County Convention & Visitor's Bureau VISTA who is often dragged along on my pretty day treks.
Posted by Kelly Anne at 2:00 PM No comments:

A Open Letter To UPS 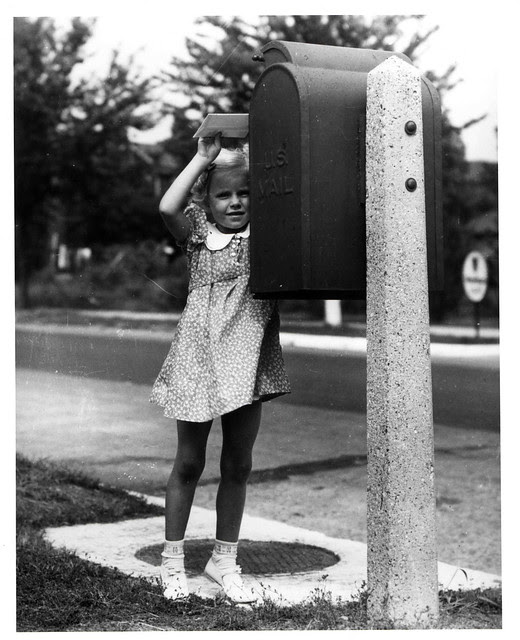 My best friend works in publishing.  In fact, she works in my very favourite genre, young adult. I read a lot of books, but I am also very poor.  So, when her department decided to purge the unnecessary ARCs, or Advanced Readers Copies, of books they had lying around the place (and because she's a kickass best friend), she naturally thought of me.  After some back-and-forth e-mailing on preferred authors and themes, she packed up TWO lovely boxes of books and sent them my way, courtesy of you generally reliable shipping service.

This was last week.  This morning, she called to inform me that according to her tracking information, the books would be arriving on my porch at some point today.  Seeing as how it's Friday, I have no life and am something of a recluse to boot, my weekend plan immediately became "BOOKS!"  I spent the day happily bouncing in my seat, watching it snow, and chanting "Books, books, books, books, books."  It was cold, windy, snowing, and my dog was being a giant butt, but nothing was going to bother me because there were FREE BOOKS headed my way.

The day dragged on into night, and the books never arrived.  "Alright," I thought sadly, "that's okay, Laura must have misread the tracking information."  It was depressing, but just one of those things.  Laura's a busy girl, she was having a stressful day.  It happens.

Then you called me.  The driver, you said, had not been able to find my house, could I provide some directions?  The packages would arrive Monday, you said.

Here's the thing.  My address is a 1/2.  I live at 905 1/2.  What that means is that there are two residences at the same address, and mine is one of them.  All you have to do is find 905, and you've found me.  It's not complicated, I swear to God.  It's as easy as locating a single suite or apartment in a building, only instead of a floor, I have a separate house.  To make it easier, I live on a highway.  It's one of only two numbered highways in town.  And we're right on it.  If you stand in the middle of it and throw a rock in our direction, you will probably hit my house.  You don't even have to have a very strong arm to pull it off.

I know that most maps get us wrong.  Google Maps thinks I live on the other side of town, on 3rd street, even though the only thing my road and 3rd street have in common are a "3."  It's frustrating, but ultimately not a big deal because my town is this big.  It's tiny.  If you end up on 3rd, you could park there and walk to me without straining yourself too hard.  Not that you would, because in the past lost UPS and FedEx drivers have simply parked somewhere central and called me to get directions.  I don't know what made this instance different, why this driver decided to take the packages all the way back to the distribution center in Elkins, a good 2 hours away.  My guess is that his GPS couldn't find me, and rather than call me or stop and ask someone in town, the driver decided to call it a day.  It was a Friday, he was probably tired.  Maybe he had plans or a super hot date.

My only point is that, while the GPS and other devices like it have made life so much simpler in so many ways, they've also put us at a disadvantage.  It doesn't occur to us to stop and ask for directions as quickly as it did only a few years ago.  And in a small town like this one, asking the locals is an invaluable habit to hold on to.  Doing so would have taken only a few minutes, and while the local in question may not have known where the house was precisely, they sure as heck would have known which street it was, seeing as how it's MAIN STREET.

I'm not mad at you, UPS.  I'm not even mad at your driver.  This is a silly letter you will never see, and a thoroughly first world complaint.  But maybe the next time your GPS takes you to a vacant lot or unmarked road, you'll stop and ask a human for help.  We're not as infallible as computers, but we're not obsolete yet.  That's the point I wanted to make, I guess.

Kelly
Posted by Kelly Anne at 9:43 PM No comments:

Email ThisBlogThis!Share to TwitterShare to FacebookShare to Pinterest
Labels: me, words

This wasn't up when the earlier post when live, but here's a little video showing what the weekend's rains did to our little creek.  And also a little bit like what it's like to live over one.  These days, it's like living on a bridge over a rushing river.  In short, I can never tell by ear if it's raining or not.
Posted by Kelly Anne at 2:01 PM 2 comments:

Musings on Sun and Slush 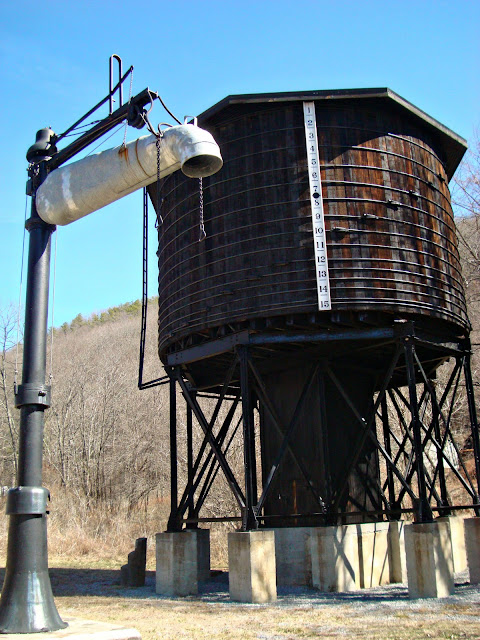 Some snapshots from the past week.  Last week, we decided to walk in the other direction than usual on the Greenbrier River Trail, which took us by this old tower which provided water to the engines on the steam locomotives, back when the trail was a railroad.  I love that the sluice is still in place. 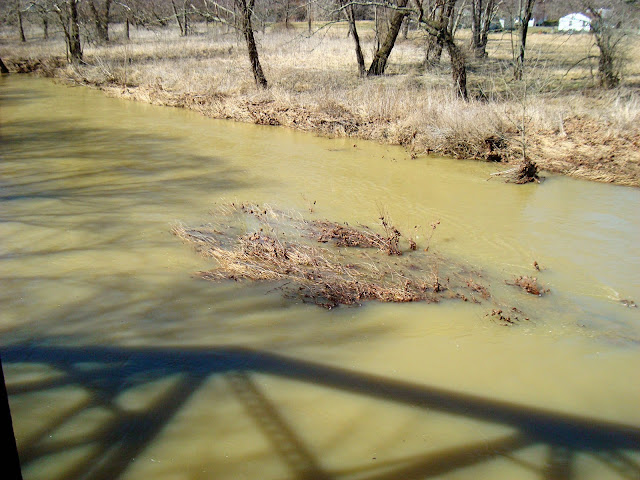 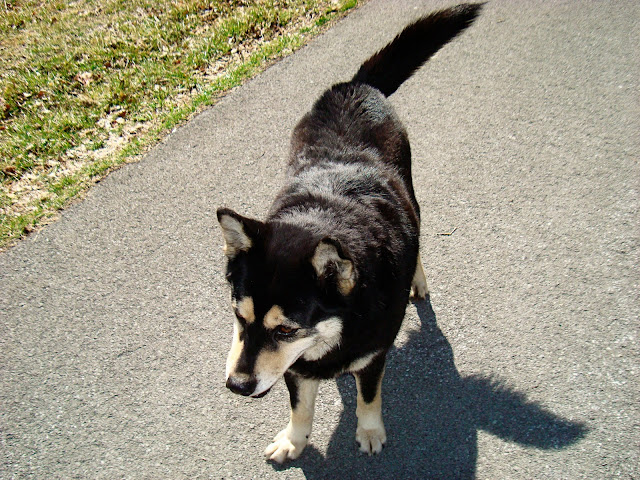 We met the town's wandering pup (who I call Gypsy because I am mad creative) along the trail.  I adore this guy.  To pieces.  He's got an owner somewhere, though I don't know who it is, but if I thought I could get away with it, I'd scoop him up and abscond in a second.  Vista loves him, so no complaint there. 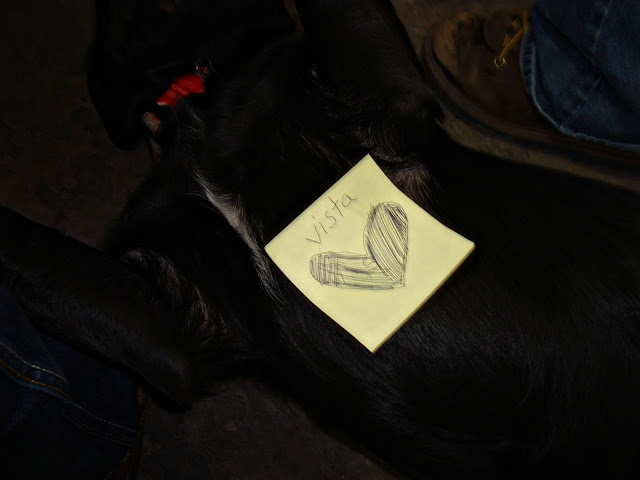 We held part one of a two part youth class last evening.  Mikey's daughter attended, and felt that Vista should be wearing her heart on her collar.  When that didn't work, she settled for her chest. 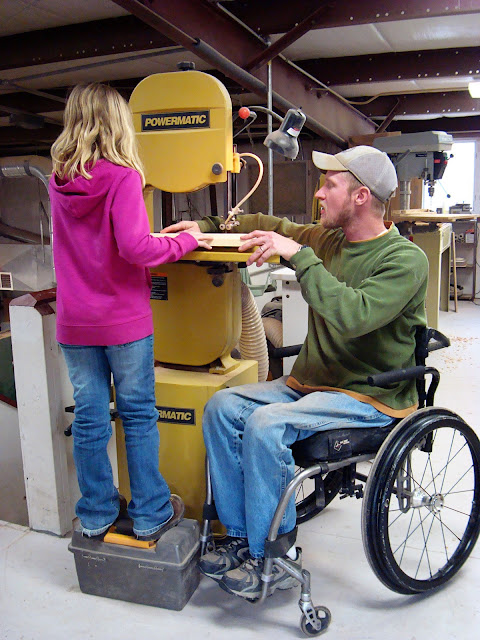 Mikey and Elizabeth jamming on the band saw.

So that's been the week.  My body can't seem to decide if it wants to be sick or not, and I've been sleeping badly, dreaming weirdly, and waking up feeling like someone beat me with a 2 x 4.  Added to that, it's been slushing all day.  Like, slush is literally raining from the skies.  That's about the definition of unpleasant right there. 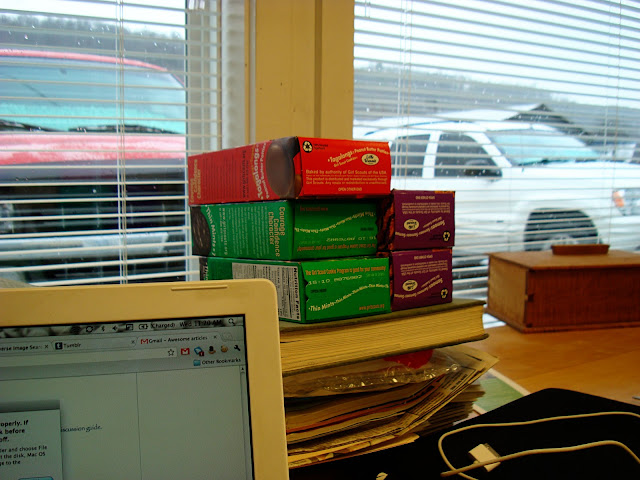 I'm stronger than the cookies.  I am.
Posted by Kelly Anne at 1:27 PM No comments:

In Which Spring Is Creeping In 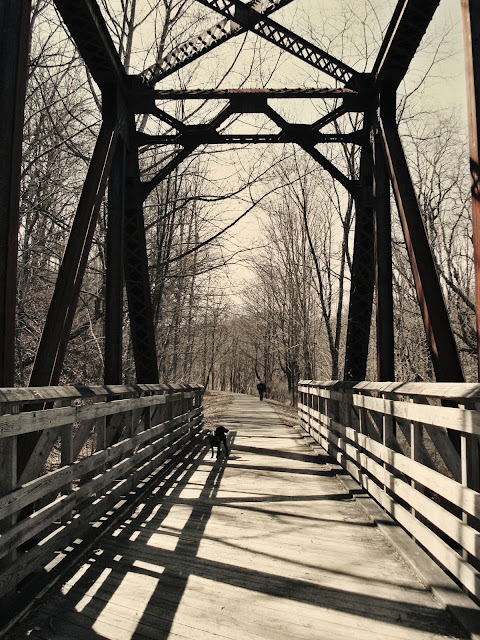 If spring isn't actually here, then winter is doing it's very best spring impression because MAN it is gorgeous out!  Vista and I have decided that daily walks on the trail are the thing, just the best thing, and we aren't letting the fact that I forgot somebody's leash in Virginia stop us, no sir.
Posted by Kelly Anne at 10:32 AM No comments:

Kelly Anne
I like tv, have a dog, and tend to obsess over things. I have the thing with doors. The kind of thing where I adore them.

Promote Your Page Too